Steep bouldering in Montana got a little better on Friday.  I went back out to a new area near Whiskey that I wandered through last week.  It’s an area that has seen some route development in the last year or so and I believe they’re calling it Whiskey Sour.  Anyways, last week I found a 45 degree overhanging cave feature so that was my main objective, the Gold Cave.  I managed to do a couple stellar new problems a V2 (the Gold Traverse) and a V4 (the Ecstasy of Gold).  I made a video of both of the climbs (see below).  I’m pretty proud of how it turned out since I was alone and I only have one camera I moved the camera and re-climbed the Ecstasy of Gold 4 or 5 times.  The view looking into the cave where you can see the start of the problem is the actual first ascent.

I decided to take the long way out on the way back, which led me past a huge roof that I also saw last week.  It’s an amazing roof with perfect rock, unfortunately like most large roofs in the Batholith there weren’t many holds.  Last week I only noticed an obvious flaring seam that overhangs a lot.  Using only the seam, it would be insanely hard.  I’ve seen a lot of V13s & V14s in Hueco, Bishop, & Joe’s and this looked harder.  So essentially, it looked impossible.  But, this week I noticed a couple crimps left of the seam which would make it an easier compression problem, still rediculously hard, but it looks do-able (not by me).  I didn’t try it, but I chalked up the potential holds so it’s easier to see the line in the photos below.  It looks like it could be one of the best problems in Montana…  There’s also a potential ‘one huge reach problem’ out the right side of the roof and a V1-ish jug haul just left of the sick proj.  I’m calling the whole thing the 80 Proof Roof (little tip of the hat to Hueco).  I’d like to get a group together and head back to try all the lines in a couple weeks, so let me know if you’re interested.  Here’s a couple photos that don’t quite do it justice. 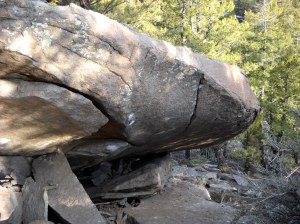 80 Proof Roof from below

I ended up going out yesterday as well.  I gave Joe and Adam a tour of the End of the Road and they managed to make the guide out of date already.  They both did a few of the classics (the Cornballer, the Italian Job, and the Seamstress) and they climbed a few new ones as well.  Adam did a V4 variation between the Cornballer and the Italian Job and Joe climbed the Ass Dragon Project.  He though that enduro V5 was a pretty accurate grade.  Here’s a few photos from yesterday.

Joe on the FA of the Ass Dragon, V5 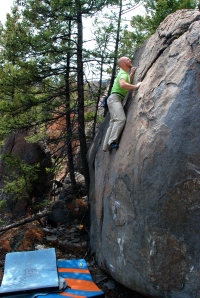 Joe gettin' ready for the high crux on the Seamstress, V2

I’m heading somewhere next weekend (hopefully City of Rocks/Castle Rock) so probably no new posts for a while.  Hope y’all have/had a good weekend

This entry was posted in New Whiskey. Bookmark the permalink.